Williams Gyang, Adebolajo Sunday and Nura Jibrin, a rare combination of talents from Central, Southern and Northern Nigeria respectively, have since the outbreak of Covid-19, attempted placing Nigeria among nations with local technologies for the control of contagions.

The trio, driven by passion and a strong desire to save the country from overdependence on foreign technology began research long before lockdowns started, hindering importation of medical equipment and other facilities for the management of the disease.

Having successfully fixed three broken ventilators at the Jos University Teaching Hospital (JUTH), the first ever in Nigeria, the young engineers attempted to build new ventilators but were constrained by import restrictions. They however started research on prevention facilities, and in August 2020 produced the first Nigerian decontamination chamber.

The system, built from scratch, from locally sourced materials, automatically screens incoming persons for facemasks, denying entry for persons without facemasks. Designed to be mounted at entry points of schools, hotels, hospitals, banks, offices, worship places, supermarkets and other public facilities, the machine automatically sprays germ disinfectants on a person screened for facemask and allowed into an airtight chamber where temperature test is automatically done.

When temperature is detected to be beyond normal, the system automatically sends signals to relevant authorities for immediate isolation of the person. Its automated exit door however remains locked after disinfection and temperature test until a user places their hands under a door-mount automated electronic hand-sanitizer, which automatically activates the exit door.

Embedded with fully automated dusk-to-dawn lighting system, 24hour wireless closed-circuit TV cameras and among others, social distance detection system, the machine, is designed to prevent the spread of all contagious diseases, not just Covid-19, Mr. Gyang, leader of the team told Journalists in Jos on Friday.

The primary aim of the innovation is to protect the country from infectious diseases, but the technology has the potential to change Nigeria’s revenue profile. Presently, the key sources of foreign exchange for the country are oil revenues, lendings and grants.

From the data above, no foreign earning came from the medical and/or electronic sectors, whereas Nigerians are reputed as the most educated immigrants in the United States of America. Nigeria is also reputed to have the largest human and capital resources in Africa, a potential that could place it among the world’s leading economies. 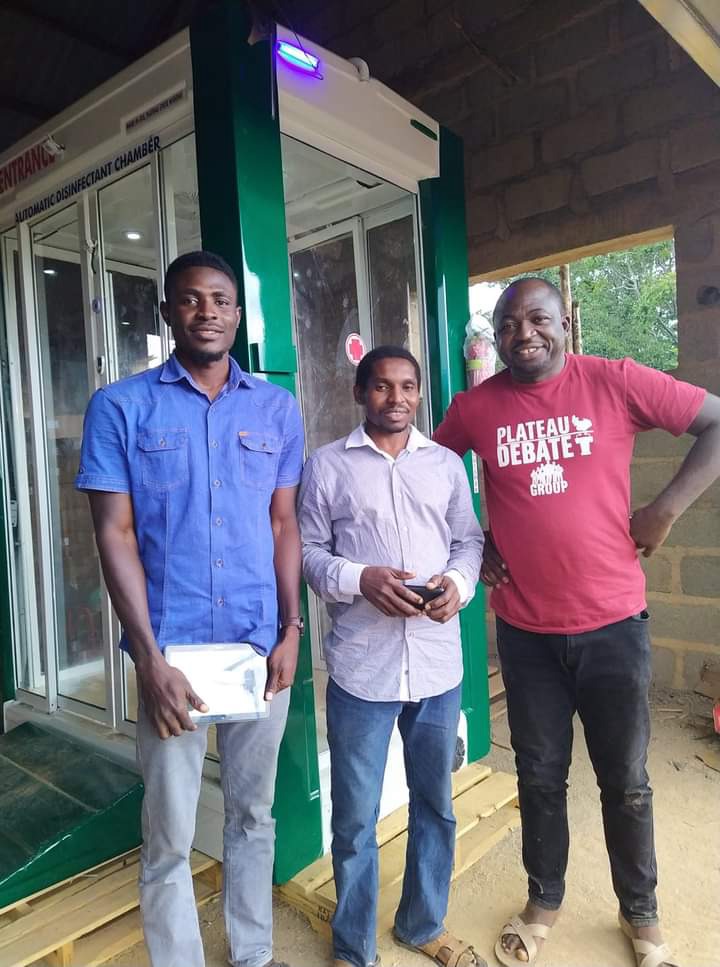 The innovations of the Plateau three, has potential to change the current story, but Officials must see the business opportunity therein. The young men, all low income earners, took bank loan of N350,000, nearly $1000USD to acquire raw materials and design the desired parts for the machines. However, no government official or Nigerian businessman has shown interest in doing business with them.

The Secretary to the Government of the Federation, Mr. Boss Mustapha in August made a brief mention of the technology during one of his regular Covid-19 press briefings and it stopped there. The Plateau State Commissioner for Information, Mr. Dan Manjang, and the House of Reps member from Jos South/Jos East constituency, Musa Bagos also visited the engineers’ technical workshop and tested the innovations. However, no grant, loan or contract has been given for the perfection and mass production of the technology. This has left the engineers grounded, and nearly deterred, but for their determination to succeed, hopefully with foreign support someday.

From expert assessment, investing in the technology has the potential to return millions of dollars in weeks, especially as global economies try to recover from the recent lockdowns and still stay safe in the years to come. If the youths will be supported to acquire part designing machines and other equipment needed for the production of the disease control systems, they would be able to produce in large quantities and supply to users within and outside Nigeria, creating wealth and employment for the country, and an enhanced public image outside.