Plateau Social Media Awards Gone Wrong; Why we were not part – Matthew Tegha 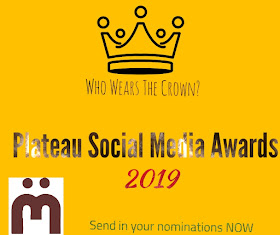 It is no surprise that the just concluded Plateau Social Media Awards has been greeted with so much criticism and protest across various platforms and categories leaving the organizers “convener” with the task of defending some of the mishaps at the award event.

It is sometimes difficult to please everyone when it comes to Awards Events as so many persons would be adjudged deserving of such accolades. Especially when you have “Social Media Awards’ Organizers who know very little about the Social Media Space.

The need to clear the air on the ‘Social Media’ Award event has become key for us even as we are now striving among other top national social brands. We are still stakeholders on the plateau social media world as we have over the past years put a lot of effort to build the social media in Plateau State. Maybe a few comments will help relax the nerves as we will not sit back or encourage any group of persons “person” to make a rubbish of the Plateau social media space. Our social platforms have been well built over the years and has set Plateau state on the social map as such we are currently able to market and compete with other social brands within Nigeria as we have moved across states.

Firstly, note that the Matthewtegha Social Media brand was not expecting an award or recognition from the organizers, we rejected the nominations right from the first time after a voting category was released without any prior letter of notification. We didn’t feel the need to participate because we were not properly communicated and will not be available due to other engagements outside the state. We never called for votes from anyone neither did we promote or post any artwork signifying participation.

We were contacted at first to be part of the organization and setup for the maiden edition of Plateau Social Media Awards. It came to us as a welcome idea being one of the foremost platforms within and outside the state as it will be an avenue for us to give inputs towards the success of the Awards in general.

After the first meeting we didn’t attend, due to short notice and our brands involvement with a national project outside the state. we were later removed from contributing on organizational matters because the team felt that we needed to be in the nominations and as such all nominees should not be part of organization. A pre-information of such decision would have saved them a lot as our impute was key to identify worthy nominees. At the point we withdrew from the organizing team we felt that the organizers did not have the capacity to hold a Plateau Social Media Awards without being sentimental and political about it.

The end result is protest and bitterness from persons across the social media space on the plateau due to omissions and deliberate highhandedness of the organizers of the Plateau social media awards.

Social Media has become one of the foremost marketing tools in the 21st century and as such any Award for social media should first of all recognize and celebrate those who have made a mark on the social space just as it is a norm and not by politicizing it, which definitely will bring a lot of hate. The organizers/convener talked about “Changing the Narrative” for popularity or personal gains, because from the categories and nominations it was very obvious.

Social media platforms have built a level of credibility over time and almost every person that has a phone can easily access information, monitor activities and criticize issues, as such you can’t give certain “Social Media” Awards away based on your own emotions because the social media space is watching and it will be easy to identify or criticize any hidden agendas.

Just being on Facebook and being able to write does not make you a complete social media influencer and certainly not an authority to identify social media best.

A careful understudy of the social media space is key to understanding how it works, that is why we have workshops and trainings to build persons as social media entrepreneurs which enables you to command the space and make good income. Such that persons begin to understand and appreciate tools like, google trends, blog/site demographics, impressions, designs and strategies

The main idea about the Plateau Social Media Awards as described by the organizers, is to change the narrative of mutual suspicion, hate speech, religious intolerance, ethnic bigotry, tribal sentiments and resentment that has engulfed the Plateau social media space. The big question here is; will you do so by organizing an award when you as organizer/convener have a strong political affiliation known by all? Certainly not because an award does not correct ills but rather recognizes achievers.

The highlight and positives from the event should be recognizing and handing out Awards to well deserved individuals who have worked hard on the Plateau Social Media Space and not the side attraction of cash rewards to charity, it is not a charity Award but a “Social Media” Award.

The Biggest Award on such a night should be the Social Media Entrepreneur of the year and should not be about politics. lets learn to leave politics for politicians and acknowledge those who are well deserving.