Implementation of most agricultural programs according to Dr. Momaleh has been generally ‘top-down’, with little or no farmers/herders’ buy-in.

Government and other actors according to Dr. Momaleh, the Permanent Commissioner, Kaduna State Peace Commission has long diverted from addressing the real factors behind the conflicts to providing stop-gap solutions which have only stoked the problem.

This is partly a result of poor reporting by the news media, said Mr. Momaleh on Tuesday at a “Media Roundtable” sponsored by Search for Common Ground, a peace international nongovernmental organization in Jos, Plateau State.

“For most part, the media failed in understanding the dynamics and supporting the nation to find workable solutions, and this made the search for solutions more complex and more political.

“Ethnic coloration was given to the evolving cattle rustling and rural banditry and that made it extremely difficult to deal with.

“When villages became the targets of bandits, the blame was turned over to the pastoralists, thus escalating aggression, conflicts and insecurity, and preventing government from engaging the right stakeholders and designing appropriate interventions for the problems,” the KD peace anchorman said.

To overcome the conflicts, a holistic “marshal plan” is needed, said Momaleh.

This in his words implies deviation from “previous interventions focused on the animals than the people, interventions that were either narrow in scope or focused on limited geographic areas.

“Such programme will require participation of all stakeholders – all levels of government, relevant interest and professional groups, private sector and international support organisations, among others.”

The media according to Momaleh however must change public perception of the issues – the “profiling; hate speech and blame game” and create the ‘appropriate’ awareness, build confidence, minimise fear as well as improve communication and build relations.

About Search for Common Ground 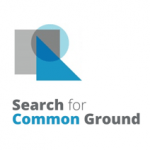 Founded in 1982, Search for Common Ground exists to transform the way the world deals with conflict – away from adversarial approaches and towards collaborative problem solving.

It work with local partners to find culturally appropriate means to strengthen societies’ capacity to deal with conflicts constructively: to understand the differences and act on the commonalities.

The NGO works at all levels of society to build sustainable peace through three main avenues: dialogue, media, and community.